I HAD A NEW WAVE ACT 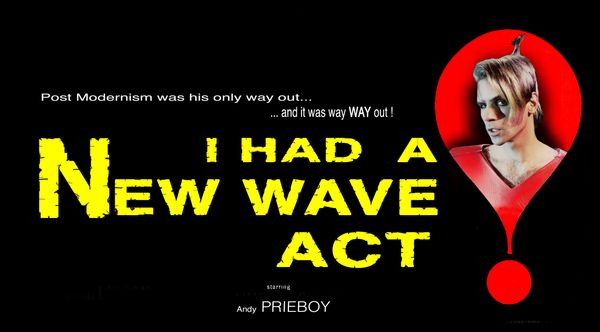 From "Every Night of My Life"

The current glut of self-hagiographies by my fellow first-gen New Wave/Punk Rock peers was the inspiration for this song. The unreliable elderly narrator in I Had a New Wave Act can’t remember if he has already told you all about his great old band. Oh, what times we had! Did I already tell you? I was in a New Wave band! Did you know that? Well, lemme tell you ...

Just be glad he isn't a recovering heroin addict or you'd have to hear that old yarn again.

While a great deal of fun to compose, recording this fatuous canticle proved difficult. Playback would reveal it's true nature: just a dumb guy singing a dumb song. It needed a context in which to thrive. It couldn’t just be recorded, it had to happen.

On top of that, the arrangement seemed to require more than just one dumb guy: it craved the support of many simpletons in vigorous agreement. Ideally, this mindless army would be made up of the idiot's brainless band and an imbecilic audience.

Thus, I paid homage to the glorious fake-live songs of my youth: Soul Finger, Hey Leroy, and the flawless Skinny Legs and All. The difference is that those artists got all their peers in the studio to make a joyful noise. I just gathered all my imaginary friends instead.

And yes, I am aware that it is not remotely a New Wave-type composition. That would have been the obvious choice.

Nota Bene: A few names mentioned in the song... and one not

1) Barry Beam: a  gifted, kindly, creative soul who had a one-man art band. On the grim Mabuhay Gardens stage, he presented a complex, humorous one-man show using reel-to-reel music /rhythm tracks. The songs were often interrupted by the voice of his mother, insisting he makes use of all those tap dancing lessons she paid good money for. Barry would oblige and begrudgingly practice tap. In a punk club, mind you. Mother's voice spoke through a little hat with flashing lights that Barry wore. He and my band, Eye Protection did a number of shows together.

After a year and a half of lame gigs, my band, Eye Protection was finally getting some notice. We were doing so well that Crime invited us to take the second slot on an upcoming show. Wow! Second slot on a Saturday night for Crime!? That was big time! Crime shows were events!

That night, the Mabuhay was packed and we were great!.  We did so well, Crime asked us back for more shows! Wow! At last, recognized by the SF punk elite, we were on our way! We were thrilled.

Soon after, Crime was interviewed in the SF Chronicle, saying "'We always ask shitty bands to open for us. That way we will always look good."

3) Jello Biafra. I'd see Jello around The Mabuhay our early days. We'd sometimes run into one another at the Cala Supermarket at 3 AM  and chat. He was a glib, friendly chappie. And before he became immortal, he did indeed, once or twice stand in the wings and watch my show, as I did his. Unlike the narrator, I highly doubt Jello ever envied me for a second. My guess is he was doing what I did: stand in the wings, watch the various singers and learn what to do and, more importantly, what not to do.

Quite possibly he learned a great deal of the latter from me.

4) Chris Isaak: another immortal who came from my Mabuhay graduating class. I did not know Chris. Back then he sang and played guitar for The Silvertones. My girlfriend at the time would insist we force our way up front to stand in front of Chris where she'd look adoringly at him, her head about level with his crotch.

I said, "Woe,baby, you are really into that guy!"

She said "Don't you know!? He is like that kid from Deliverance. He is a mental defective. An imbecile. A man-child. But he can play music like no one else. That's why I love looking at him: he is a miracle."

Having learned all this, I looked at him with different eyes. God had bestowed the gift of music, stage presence, and movie star-like good looks upon this poor half-wit. Well, let her look! He is no threat to me! So I, too, looked adoringly upon this natural wonder.

It wasn't until years later when Chris  became a major star that I woke up in the middle of the night and thought, "Hey, wait a second...."

5) Yes, that’s me in the photo.No I did not dress like that on stage. That is a still from a  low-budget New Wave film from 1982. I was a Martian or something.

Like you didn't go through your own Bowie phase.