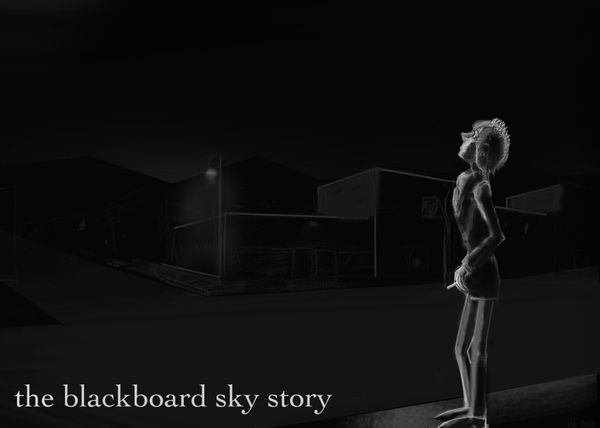 Recently, my friend JtL from WallofVoodoo.com wrote and asked for the lyrics of Blackboard Sky. I am including them here with a little backstory.Thanks, JtL!

I am also offering a solo piano version of the song, gratis!

A young man stops at the junction of Melrose and Cole. He waits to cross. He is tall, thin, and if you even noticed him you'd think "another trendy art-twat who works retail ..."

If you looked real close, you might also opine "that idiot dyed his hair so much, all the ends are all breaking off on top..."

What you can't possibly know, is that under all that hair dye and proto-Gothic fashion broods a heartbroken young man who, for the first time in his life, has had a love affair die on him

Poor soul.He is already struggling with a stalled music career. He has no band and no prospects. He is still new in town and is working retail for minimum wage. And to think, only a year ago, he signed a production deal and moved to LA. She came here with him to partake in that glorious future when (and if) he became a major label recording artist.

And it all went up in smoke...

There is nothing now but the endless jog between regret and recrimination. A never ending battle of protecting his fragile sense of self from the dragon of truth.

So, on the corner, he stops. He looks up at the dull night sky and thinks it looks like a dirty blackboard at the end of a long school day.

And then something comes over him. He lets it all go. To that ashen sky, he says, in effect, you take her. I can't carry this anymore.

He imagines drawing her face on that immense dirty blackboard.

Suddenly - in his mind, in his heart, he feels a little relief. The leaden skies clear, and he sees her differently: majestic as a cloud bank, distant as the full moon. She is too far away now to hurt him anymore.

Later that evening, he applies that moment to a song he'd already been working on.

"I draw your face on the blackboard sky" fits perfectly.

Now if he only had a band he could show it to.

And so they did. And it ended up on Seven Days in Sammystown.

And that young man, no longer young but still dying his hair,  plays it to this day.