WHEN IT RAINS IN LA 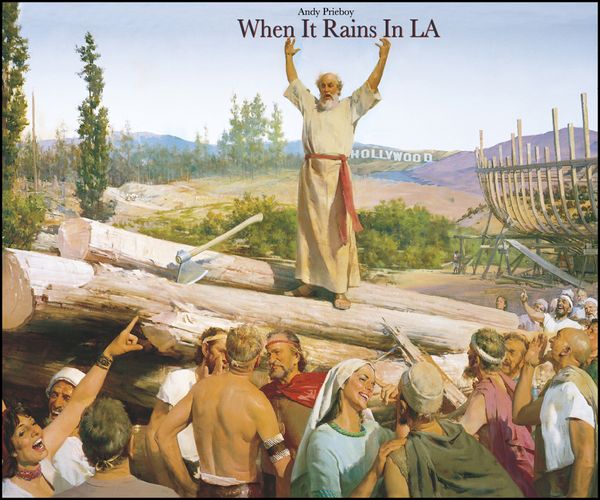 During the current California rainstorms, I revived this old, old song.

The Short Story:
The sequel to Noah and The Flood in modern Los Angeles.

The Long Story:
1987
While gathering songs for the follow-up to Sammystown, I wrote a basic version of When It Rains in LA. The lyrics were a simple-minded ode to love accented by a rare Los Angeles rain. Though I made a fully orchestrated model, I never showed it to Voodoo.  It was just too common a chord progression and too romantic a theme.

I never developed it further than a first draft and so, the song went into hibernation.

1990
By the time I was working on my first solo album in 1990, I became friends with Carlos, an El Salvadorian custodian at MCA Universal where I recorded. As I was there five nights a week, 8 pm until 3 am, we'd often hang and shoot the shit on our breaks.

During a rainstorm, I returned to the song with a new story: God, in true Hollywood fashion, decides to make a sequel to The Flood. Sticking to the terms of His contract, He spares the world and just drowns LA. However, our merciful God spares the outcasts in that city of dreams.

I pictured Carlos, the humble, hard-working immigrant, in the role of Noah.

I envisioned long, detailed, sadistic narrative of a deluged Hollywood.
The first two verses and chorus were as far as I got.

And the song, once again, hibernated.

2013
At the piano one evening, I happened upon When it Rains in LA and decided to finish it. To hell with the long narrative. Noah gathers the losers and now what? Does he build an Ark? Oh, God, everybody does that. No. Too boring.

I got it: God instructs Noah to hi-jack the Queen Mary. Fill it full of the unknown and unwanted.

Well, almost. Sort of. There needed to be a coda or something. There needs be a little wasabi and pickled ginger at the end of the chorus. Some kind of chord change.

And the song hibernates again.

February 2017
It begins to rain. I sing the song. I figure out the end of the chorus. A little coda. A chord change.

And to paraphrase The Book of Genesis "...In the thirtieth year, on the twentieth day of the second month since its inception, the song came to rest upon the mountains of Ararat."

Listen to When It Rains in LA