BUILD A BETTER GARDEN has a history almost as long as the Book of Genesis itself.

The original was written about 1993. It took me many weeks and cigarettes to write. In those pre-google days, I put together the list of battles,treaties and wars by scouring through my books. More weeks and cigarettes followed trying to make it all rhyme. In a good-enough state, I recorded a rough demo using a Tascam four track, Casio drum machine, and my badly tuned pianoforte. Jeff Trott dropped by my Silver Lake home and  added a rich layer of guitars.

By the time I tracked it for Sins of the Father, in 1995, I had decided to slow it down. At the time, I was advised that if I made it shorter,Garden might  be released as a single. So out went the list of battles and treaties, which can only be heard as superfluous fade-candy when  the song ends.

And then, of course, it never became a fucking single, so kiss all that lyrical work good fucking bye.

As the song begins, Satan is attempting to comfort Adam and Eve after God has expelled them from the Garden of Eden. "We won't need that old Garden,"the Prince of Darkness crows "we will build a better one!". He lists all the wonders that will lay before them: bars, booze, shampoo, sex toys, Buicks, glorious wars with their battles and well intended treaties, not failing to mention "white trash strippers named Tammy, Lynn and Tawny. 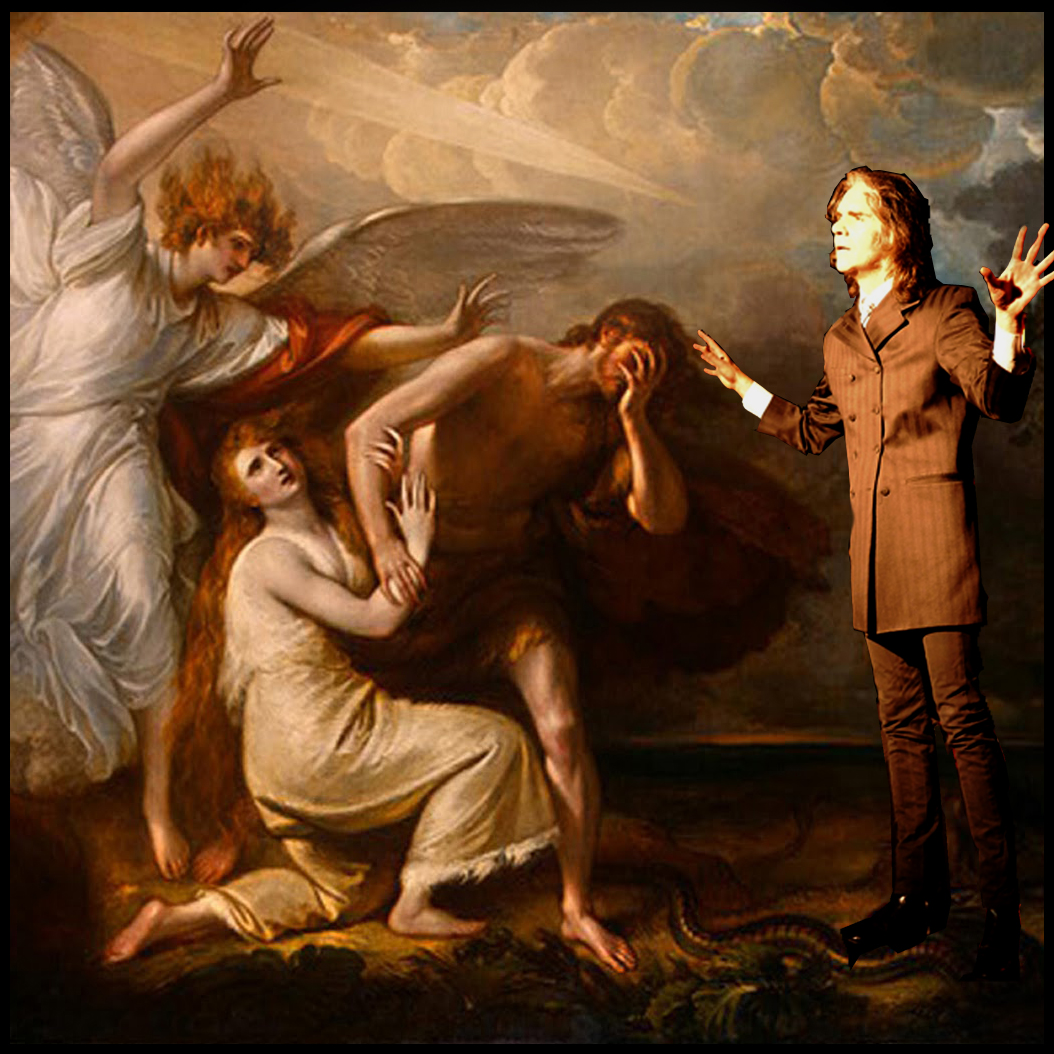 Satan Consoles Adam and Eve With a Bright New Idea

My intention for Satan to hold forth on the rudiments of supply and demand economics in verse. Transfixed by the sound of his own voice, he spoke of Cain and Abel and the mortal struggle that was to ensue.

Better minds than mine have pointed out that The Story of Cain and Abel is an allegory for the triumph of agriculture over Nomadism. Abel, a meek shepherd wandering the earth in a state of happy acceptance is at one with God and is thusly blessed. Cain, on the other hand, is a farmer with a complex set of needs. He's stuck in one damn place with a million things to do. Just to harvest a simple dish of peas, he needs rain, loam, seeds, sun, storage, employees, rakes, hoes, rail yards, insurance, paid vacations, just to list a few.

The sin of his father falls on Cains head, not his happy hippy-dip brother. Cain, and all his damn requirements for living, gets zip. Cain doesn't take it well, even though God advises him to chill and just to back off a little. Instead, Cain kills Abel and crowns Agriculture and Industry the winner in the battle over Nomadism.

But, as I said, all that got written out for a single that never happened.

In 2011, I re-recorded the original version Build a Better Garden. Assisted by Tony Kinman and David Kendrick, Garden was tracked at its original intended speed of 145 bpm. It includes the unedited lyrics as first written. I have performed Garden at just about every show. I often get asked about the list of wars and treaties. So, I revived the original version for your listening pleasure.

To hear the song in question

This version of Build a Better Garden is for sale only in the Music Store here at andyprieboy.com

Happily, Apple does kindly allow you to purchase my work directly onto a computer and transfer it to your iPhone iPods. And for that we must be grateful.


Also:
If you would prefer to purchase this song on iTunes a give them a chunk of your hard earned buck